Blue sky and sun prevailing. In the afternoon moderate southwesterly winds in Beaufortin the and Belledonne ; decreasing later. Elsewhere...

Blue sky and sun prevailing. In the afternoon moderate southwesterly winds in Beaufortin the and Belledonne ; decreasing later. Elsewhere...

The resort of les Arcs is proud to have set a new World Record... Thanks to the 2887 skiers who took part, the longest torchlight descent took place on the pistes of les Arcs. Success at the first attempt, 10 years after the previous record in which 2854 people took part in the resort of Schwarzsee in the canton of Fribourg in Switzerland, in 2006. Since then, no French resort has been able to beat it!

The torchlight descent is usually restricted to ski instructors during the holidays, but on this occasion it brought together little ones and grown-ups, friends and families for a special moment in the magical night-time landscape of Arc 1800.

The organisers, SBEF Ski Team, with the resort of les Arcs, the ski schools and ADS (ski area) worked to ensure that this was an extraordinary shared moment. 2854 skiers skied down the piste in the resort of Schwarzsee in the canton of Fribourg in Switzerland on 28 January 2006 to beat the Torchlight Descent World Record. Despite several attempts in Austria, France and Italy, this world record has never been broken.

This year, the resort of les Arcs and the Sbef Ski Team have taken up the challenge to break the Torchlight Descent World Record. To do this, 3000 skiers are expected on 18 February on the Vagère piste to take up the challenge.

The ski instructors’ torchlight descent is the classic and unmissable entertainment of a winter sports holiday. The slight difference here is that it won’t just be ski instructors skiing down the piste, but YOU too!

Get your diaries out!

Make a date for 4.30 p.m. at the bottom of the Vagère chairlift. Taking part in the Torchlight Descent World Record is free.

All skiers, as long as they have reached the 2nd star technical level (basic parallel turns, side-slipping on blue and red pistes), are welcome to take part in this world record.
Children and 2-star level skiers will be kept warm with hot chocolate in the Altiport mountain restaurant before the start of the descent and will finish on the snow front in Arc 1800, via the Belvédère blue piste. Other skiers will set off from the Vagère red piste at the top of the chairlift of the same name and finish on the snow front in Arc 1800.

To enter, nothing could be simpler!

All you have to do is print and fill in the entry form below and hand it in at the bottom of the Vagère chairlift the day of the event.

Should you wish, you can also enter in until the day before the event :

> All Tourist Office receptions in les Arcs, Bourg-Saint-Maurice and Peisey-Vallandry and the web site www.sbefskiteam.com/record-monde-flambeaux
> Through participating shopkeepers and accommodation providers in les Arcs’ various villages

> Minors must be accompanied by a parent or an appropriate adult or provide consent authorised by a ski instructor.
> Free access to Vagere Ski lift for all participants!

> Wear very warm clothing and a helmet for children (also strongly recommended for adults).
> Don’t bring your ski poles; you won’t need them because you’ll be carrying a torch instead.
> The torch (soft handle with LED and battery operated), will be given to you at the bottom of the Vagère chairlift after check-in by an official bailiff counting the participants. Do not turn it on until expressly asked to do so by the organisers.
> Expect a wait at the top of Vagère before the descent starts, with entertainments and hot drinks.
> The record will be marked by a firework display at the end of the descent.
> There will be a chance to win some prizes in the tombola! ! 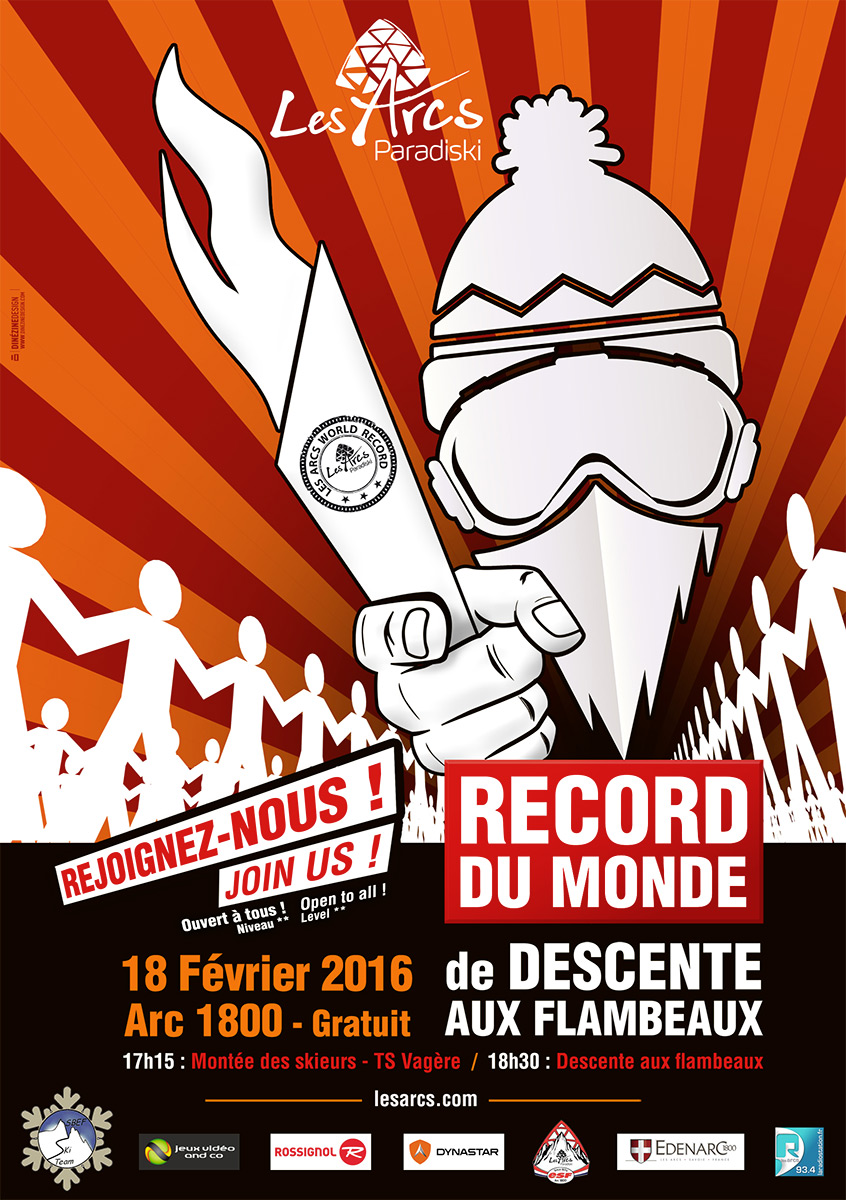